Vince Shute Bear Sanctuary is only a 30 minute drive from the Crane Lake area. It's well 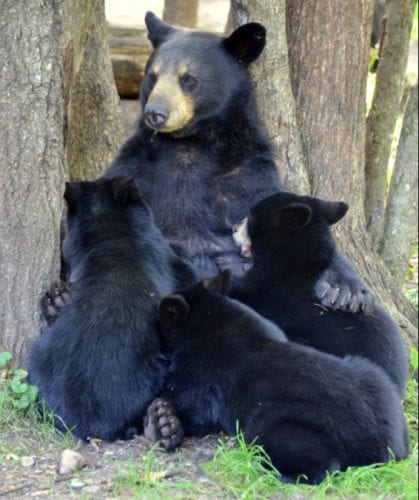 worth a day trip to see the bear in their natural habitat.

When bears emerge from their dens they wake up SO hungry & thirsty! Some have gone 6-7 months without eating and drinking. As they begin to wake up from hibernating, it is a bit of a process. It takes them 2-3 weeks before they start to feel normal again and before their metabolic processes return to normal. As they begin to wake up, it is not uncommon to see the bears pop out of the den for a bit, eat some snow, take a little stroll around their denning area and go back and lay down. Bears are still pretty lethargic during this time period so they stick close to their den still until their body readjusts. Bears in Minnesota typically leave their dens in March and April but we do not start to see an increased level of bear activity at the sanctuary until mid-May. May is a great time to see TINY cubs as they were just born in late January, early February so start planning your trip today!

To see mother bears nursing cubs in the wild is a very special and rare behavior. Some wildlife biologists go their entire lives and only see this a handful of times. Since the Vince Shute Wildlife Sanctuary offers a sneak peak into the intimate world of the normally reclusive black bear, nursing is seen from our viewing platform a handful of times throughout the season (sometimes even more outside of the hours in which we are open to the public). Having the opportunity to view mother bears nursing is unpredictable since the bears are wild bears and come and go as they please. However, mother bears will typically nurse their cubs roughly until the age of one so it is something that can be seen throughout the entire season during the hours in which we are open to the public (Memorial Day weekend- Labor Day weekend).

It is a huge privilege to observe this special bond between mother and cubs. It is one that us staff truly cherish and never grow tired of seeing. If you have not visited our sanctuary yet, start planning your trip for the 2018 season!

View all posts by: craneadmin27