Birding is a favorite activity in the Crane Lake Area. A guide to the Birds and Wildlife of the Voyageur Country is available for download at www.birdvnp.com. Call or e-mail: 800-362-7405 or vacation@visitcranelake.com for a brochure. 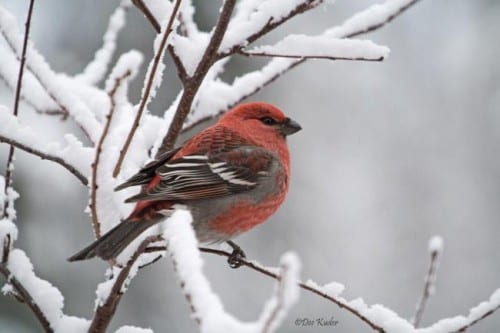 A blue heron rookery can be viewed just north of the Northwest Bay Beaches on Crane Lake. These nesting sights are recognized by the Audubon Society as one of the largest. Moose, black bear, wolves, mink and lynx are elusive but can be seen if you are persistent. More commonly seen are bald eagles, osprey, loons, beaver, deer, ducks, pelicans, cormorants and otters.

Gull Island near the center of Namakan Lake, is worth the trip just to view thousands of seagulls that have established the island as their primary nesting sight.

Contact the bureau for the latest birding guide designed exclusively for the Voyageurs National Park. We can send you a copy or I can tell you where you can purchase it. Check it out!

Why is Minnesota such a good birding state?
Minnesota is located where western prairies meet boreal forest and southeastern river-valley ecology. These three major habitat types give Minnesota a significant and highly varied bird population: 421 different species of birds have been recorded here, about half of those recorded for all of North America. Northern and east-central Minnesota lie in a narrow forest belt (that stretches from the New England states across the Great Lakes) that supports a higher diversity of breeding songbirds than anywhere else in the United States and southern Canada. Minnesota's extensive forest region is considered by leading ornithologists as one of only four remaining areas in the United States where the long-term conservation of forest birds can be accomplished. (The other three areas are the extensive forests of Maine, the Great

Smoky mountains, and the Adirondacks.) The American Birding Association asked its members to list the species of North American birds they most wanted to see. Of the top 12 species listed, six can be found in Minnesota: Boreal Owl, Great Gray Owl, Connecticut Warbler, Northern Hawk Owl, Yellow Rail, Snowy Owl. Gyrfalcon, another highly sought bird, also can be found in Minnesota most winters. The official list of bird species recorded in Minnesota stands at 422. Of that number, 305 species can be found in the state on a regular, annual basis. About 260 species nest here.

Minnesota Birds Checklist - Download, print and take with you!

Events and Dates
December · Christmas Bird Counts: Usually mid-month Saturday. Many of these are held each year throughout the state as part of a historic national bird census.

Month-by-Month Birding in Minnesota
January · All birders return to "go." This is the month for true Minnesota species, but interesting visitors occur: Snowy and Great Gray owls, Snow Buntings, Lapland Longspurs, Redpolls, and Tree Sparrows, among others.

May · The huge push north of migrants and Minnesota nesters. This is the busiest month on a birder's calendar, the month for "big days"* and birdathons.

June · Majority of resident nesters on territory and courting.

November · Last of ducks moving out of state. Swans gathering on Mississippi River near Winona are at peak numbers. Bald Eagles numbers peaking in migration.

December · Christmas Bird Counts. The final migrants leave. If northern owls invade the state, this is one of the months when they will be in evidence (also November and January).

Big Day, a competitive (but friendly) birding event. A "big day" is an event in which birders (one or more) attempt to see as many bird species as possible within a defined geographic area (such as a county) during a particular period of time (usually 24 consecutive hours). This is a game. It has rules. Scores are kept in the form of the records.