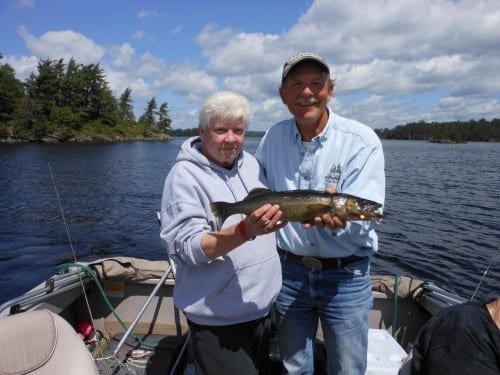 The walleye is the most sought-after fish in Minnesota. Its thick, white fillets, handsome shape and coloring, and elusive nature make it the ultimate prize among anglers. Each year, anglers in Minnesota keep roughly 3.5 million walleyes totaling 4 million pounds. The average walleye caught and kept is about 14 inches long and weighs slightly more than 1 pound. The walleye is named for its pearlescent eye, which is caused by a reflective layer of pigment, called the tapetum lucidum, that helps it see and feed at night or in murky water.

A close cousin of the walleye is the sauger. Sauger have a more limited distribution than walleyes, and they don't grow as large. The two species look similar, but you can tell them apart by looking at the tip of the lower part of the tail. That part of the tail is white on a walleye, but not on a sauger.

To ensure that lakes produce enough walleyes to keep up with growing angler demand, the DNR protects habitat, limits the catch through regulations, and stocks fish where natural reproduction is limited and other desirable fish species will not be harmed. In recent years, the DNR has also instituted special regulations that protect medium-sized walleyes on several lakes to increase the average size of walleyes that anglers can catch.