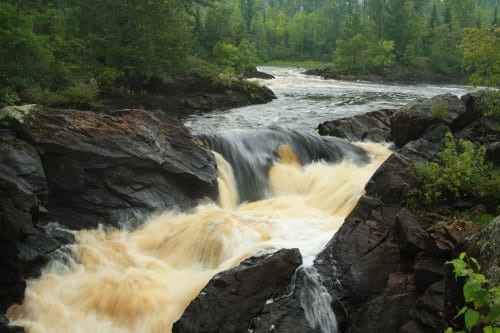 Voyageurs National Park lies in the southern part of the Canadian Shield, representing some of the oldest exposed rock formations in the world. This bedrock has been shaped and carved by at least four periods of glaciation. The topography of the park is rugged and varied; rolling hills are interspersed between bogs, beaver ponds, swamps, islands, small lakes and four large lakes. In the years since the last glaciation, a thin layer of soil has been created which supports the boreal forest ecosystem, the "North Woods" of Voyageurs National Park.

This land is rich in human history. Named for the Voyageurs, French-Canadian canoe-men who traveled these waters in their birch-bark canoes from the Great Lakes to the interior of the western United States and Canada. Modern voyageurs continue to ply these waters. The water, accompanying scenery, geology and rich cultural and natural resources that give Voyageurs its national significance, merits its protection for the enjoyment of present and future generations.

On the northern edge of Minnesota's border, 55 miles of the park meander along the Canadian border with Ontario. Voyageurs is about 15 miles east of International Falls, MN and 300 miles north of Minneapolis-St. Paul, MN.

Voyageurs is a water based park. Access to the Kabetogama peninsula, the islands and nearly all of the park's shoreline is by watercraft. Free public boat ramps and parking are available at the park's visitor centers and at the Kabetogama State Forest Campgrounds.